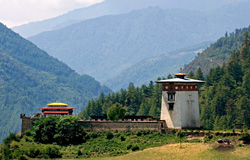 The Haa Valley is one of the most picturesque districts in Bhutan. An ideal day trip from Paro beyond the beautiful Chelila Pass, Haa is the ancestral home of the Royal Grandmother and the Dorji family, and is characterised by its rugged and mountainous terrain. Legend says that the Haa valley was previously dominated by animist traditions before the tantric master Padmasambhava visited the valley in the 8th century and transformed their beliefs into peaceful Buddhist traditions. In addition to its natural beauty, Haa also features a number of interesting sites including Chhundu Lhkhang, dedicated to the valley’s protecting deity, 7th century Lhakhang Karpo (white) and Lhakhang Karpo (black) and Haa Dzong. Haa’s annual summer festival provides a fantastic opportunity to participate in the nomadic lifestyle of the Haaps, including savouring their delicious delicacies. You may also compete in the traditional game of khuru, archery and soksum and try hitting the bull’s eye.