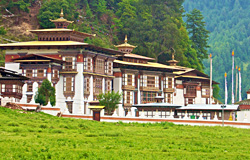 Bumthang is the spiritual heartland of Bhutan and distinguished in history as the first place Buddhism was introduced to Bhutan by Guru Rimpoche. Its undulating green valleys are renowned for their natural beauty, historic palaces, numerous temples and important ancient Buddhist sites. Some of these include Kurje Lhakhang, home to a rock featuring the imprint of Guru Rimpoche’s body, 7th century Jambay Lhakhang, one of the Kingdom’s oldest temples and the Tamshing Monastery containingsome of the oldest wall paintings in Bhutan.

Other highlights in the Bumthang Valley include the 16th century Ugyen Chholing Palace complex housing a fascinating museum, 14th century Tang Rimochen Lhakhang where Guru Rinpoche meditated and Mebar Tsho (Burning Lake), where some of Guru Rinpoche’s treasures were found in the 15th century by the famous treasure discover Pema Lingpa.