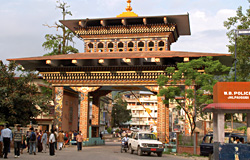 The bustling frontier trading town of Phuentsholing in the south is the gateway to Bhutan for overland travellers from India and Sikkim. It is Bhutan’s second largest town, and is located next to the Indian town of Jaigon. Karbandi Monastery is a popular temple for those wishing to have children after an Indian pilgrim became pregnant after praying at there. It also provides wonderful views over Phuentsholing and the Bengal Plain. From Phuentsholing, the road winds north over the southern foothills, through lush forested valleys and around the rugged north-south ridges of the inner Himalayas to the western valleys of Thimphu and Paro. Hairpin corners on this breathtaking six hour drive are, to reassure the traveler, marked with tall, colourful sculptures of the Tashi Tagye, the eight auspicious signs of Buddhism.